The Skimmate PodCast with Rich and Terence. It’s a podcast, about reef keeping, by two reef keepers that are polarizing enough to be interesting. This is the page where you find out more about each of them.

Richard Ross is known for the “Skeptical Reefkeeping” article series, his groundbreaking work with cephalopod husbandry, his entertaining and informative talks, for managing the ambitious 212,000 gallon reef tank in the Steinhart Aquarium in the California Academy of Sciences, and most recentlyfor spawning Acropora sp in closed systems as part of the Albright Coral Spawning Lab/Graduate work at CAS. Richard has kept saltwater animals for over 30 years, has worked in the aquarium industry and trade (maintenance, retail, wholesale) and has consulted for a coral farm/fish collecting station in the South Pacific. In 2015, Richard was presented with the MASNA Aquarist of the Year Award (now the MASNA award), and his work has been covered by Scientific American, National Geographic, Animal Planet, Penn’s Sunday School, NPR’s Science Friday, Discovery News, Fox News and more.

Before working in the animal world he was a professional Juggler and corporate presentation script writer/script doctor. He is an avid underwater photographer/videographer and has been fortunate to scuba dive many wild reefs. At home he cares for a 400 gallon reef system and a secret home lab, two hairless dogs, 2 hairless cats, 2 geckos 6 chickens, a captive bred beaded lizard, and the occasional injured corvid. When not doing all that stuff, he enjoys glass blowing, juggling, ice skating, horseback riding, mixed martial arts, exercising his philosophy degree, spending time with his fabulous daughter and his incredibly generous, intelligent, gorgeous and patient wife.

Check out www.theRichRoss.com for more info

It seems Terence has always been into technology of some sort or another – and has always had a love of water. In fact, his mom says it all started with his Atari back in 1980. Terence has a degree in computer science from Cal State Northridge and a successful, 29-year career marketing many different hardware and software products.

Terence’s introduction to saltwater aquariums began in 1985 when he set up and maintained a 60g hex tank in a bamboo pagoda stand that had everything from eels to rock crabs to huge anemones legally collected from pacific tidepools. In 2009, and after a 23 year hiatus from the hobby, he decided to get back into the game and again take on a saltwater aquarium. Right away, with his 110g reef tank, he could see the need for control and monitoring electronics. This was also about the time the Apex AquaController by Neptune Systems was launched. So he got one and dove head first into automating and controlling everything he could — and dragged others into it as well. Fully addicted and with a desire to do more to help people be successful in the hobby, Terence co-founded the Utah Marine Aquarium Society (UTMAS) in 2010.

In 2012 Neptune Systems hired Terence as their VP of Sales and Marketing.  Terence, his wife Nancy and son Diego live in Gilroy, CA, the Garlic Capitol of the world. He now has a 3-year old, 425-gallon SPS-heavy reef tank that, you guessed it, is fully automated top to bottom.

Terence has given countless talks at MACNA and other events worldwide the subject of being more successful at reefkeeping using aquarium monitoring and control. 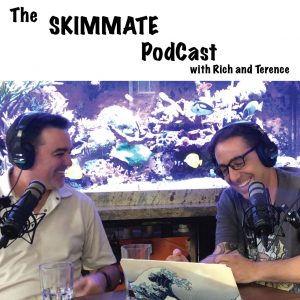 Copyright © 2022 The Skimmate PodCast. All Rights Reserved. Theme by ILoveWP.com